In my previous post I described the wiring of the inlet for easy connection of a backup power. Here is a list of the parts in my battery backup system. 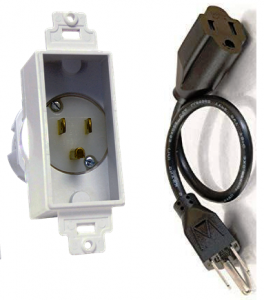 MIDLITE 4642-W recessed power inlet with NEMA 5-15P plug (see image to the right). It comes with a narrow box, so that a regular extension cord will not fit inside. I had to get a NEMA 5-15 extension cord for this inlet.

Gardner Bender GSW-16 heavy-duty toggle switch plays a role of a transfer switch. It has three states: ON-OFF-ON, so it will never allow a cross conduction between two power sources.

Battery 8A22NF 12V 55AH AGM. In theory, I could just buy an UPS power supply. However, I already had an inverter, so I needed only a battery. In addition, a cheap UPS has a small battery. The devices with larger batteries have also large inverters, which I don’t need and which increase the cost.

The reason I picked AGM (Absorbed Glass Mat) type is legacy flooded electrolyte batteries contain liquid electrolyte that can spill and can only be installed upright. In contrary, AGM is spill-proof and can have over twice the cycle life of conventional flooded ones.

Leicestercn LST 1.1A automatic battery charger/maintainer. It is made in China, but I was impressed by its performance. First, it charges the battery at its maximum current until it reaches 80% capacity. My battery came partially pre-charged, and in this mode I measured the starting voltage at 14.4V (if it was discharged, the initial voltage would probably be lower). Then LST keeps charging at fixed voltage (14.6V). Finally, when the battery is fully charged, it switches to float mode (13.6V). A combination of two LEDs (which can be ON or Flash) shows the status of the charger. This device conveniently comes with two sets of cables for easy hookup: one with clip connectors and the other one with ring connectors.